The Greater Manchester College Hack is an event created for anyone aged 16-18 at college in Greater Manchester who is interested in or wants to learn digital skills by participating in challenges set by local tech companies. The companies provided prizes and mentors who were on hand for both days with their experience and knowledge to help the participants to learn and grow.

The event was organised by Damien (@damienpayton) from Hive Learning Network (@hivemanchester). The motto of Hive is to introduce young people to the digital industries by organising events that are fun and friendly, with an emphasis on teamwork.

Loreto College (@loretocollege) hosted the event, making us all feel welcome and providing solid IT support.

Why does Auto Trader sponsor it?

At Auto Trader we are keen to give back to the local communities and make a positive impact on the industries we operate in. We proudly sponsored this event with an aim to inspire young people and to develop the next generation of tech talent. There is also an opportunity for students to understand what early career options are available through Auto Trader, be it the apprenticeship scheme run by Manchester Digital (@McrDig), or our own graduate programme.

Auto Trader provided funding for this event, as well as mentors, who were available for the duration of the event. They were around for the participants to ask for friendly advice and help for their hack ideas. By providing this opportunity for employees, Auto Trader sees this as a great way to help colleagues contribute to causes close to their heart and help them grow by staying motivated in inspiring future talent.

First to brief the students were CDL. Their challenge involved creating their own version of the classic arcade game ‘Asteroids’.

Next came our turn to explain our challenge. We wanted the students to create a game that encouraged people from all backgrounds to become more interested in the world of technology. As well as being competitive and fun to play, we emphasised that the game should be inclusive. We left it up to the students to decide what type of game they created, and what technology they used.

Finally, CyberFirst briefed the students on their challenge, which was to produce a program that helps students navigate their way around their school/college.

The first day meant an earlier start of 9 a.m. for us mentors, as we helped set up and were briefed on how we would be supporting the students. When we arrived, we were told we would need to present our challenge (something we weren’t prepared for, but we managed to get some slides together last minute!) Out of the 4 mentors from Auto Trader, only one of us had previous experience with mentoring at a youth hackathon, so we spent a bit of time picking his brains on what we should expect.

By around 10 a.m. most of the students had arrived and formed their groups—a total of 16 groups from 8 different colleges. Once we had presented our challenges and the teams had chosen one we had a quick walk around to get an idea of how many teams would be completing our challenge, and if anybody needed any initial support. The rest of the morning was pretty much spent by the teams brainstorming ideas and delegating roles and responsibilities. A few of them had also started writing their code.

The difference between this hackathon and previous youth hackathons we have supported, was that some of the students were studying (and had a real interest in) computer science. This became quite clear throughout the afternoon as we found that they really didn’t need much support in terms of coding. Others had very little experience and we were able to give them more support to put their ideas into practice.

Day two saw the arrival of a fresh set of mentors from Auto Trader, given a boost by an excellent hand-over from the day one mentors. We met the teams working on the Auto Trader challenge and were impressed with what they had been able to achieve already.

Our role on the second day was to offer support where it was wanted, understand what the teams had done so far, ask questions to help them develop their ideas and, finally, to decide the winners of the Auto Trader challenge and present the prize.

At 3 p.m. it was keyboards down and time for the teams to demo their work. Mentors and interested hackers gathered round each team in turn to see what they had done and ask questions.

We had two teams who had built robots using CamJam kits that had been supplied. One of the teams with very little experience had struck up a great relationship with one of the mentors who was helping them get their robot working. They had lots of creative ideas and enjoyed themselves hugely. The other team had been put together from two people who had come by themselves to the hack. They had built two remote controlled Sumo wrestling robots that tried to shove each other out of a ring on the floor. They became so interested in adding features to the game that they decided to focus entirely on the “competitive and fun to play” part of the challenge. 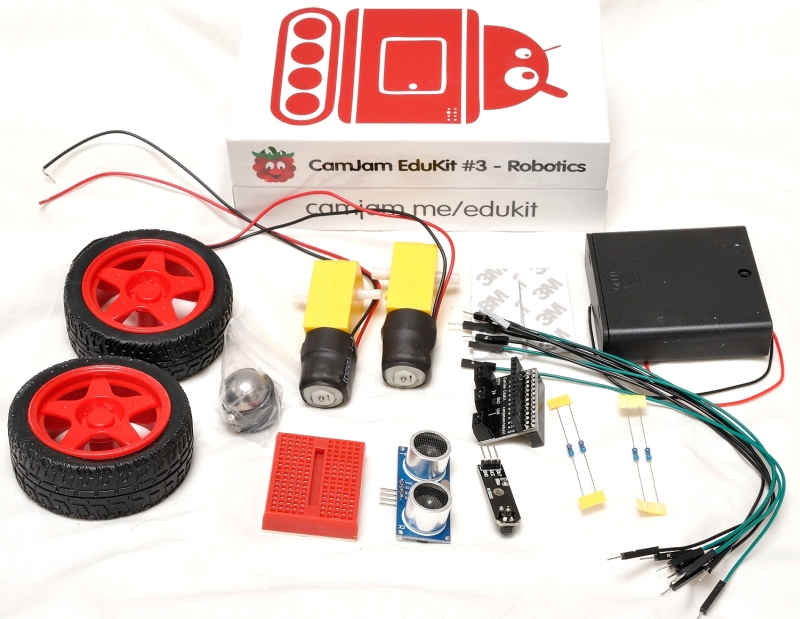 The third team quickly got going with PyGame (a games platform for Python) and a maze generator they found on the internet together with some code to move around the maze. They spent day two working on a command window for entering commands to move about the maze (and encourage programming skills), a help file to encourage beginners into Python, and making a leaderboard. They didn’t quite manage to get the leaderboard working but the rest was great. The command window even had syntax checking and error messages!

The fourth team used Unity 2018 and C# to create their game but manually coded all their elements. They had a repeating plane with trees sized, rotated and placed randomly, a 3D car player they had built themselves and music they had written themselves (that I couldn’t hear).

The last team entered the CDL challenge and used PyGame and Python to create a good Asteroids game controlled with the keyboard. They had also hoped to enter the Auto Trader challenge by adding a Raspberry Pi gyroscopic control for the game to make it more accessible and did a lot of work on that, getting very close. They withdrew from the Auto Trader challenge but we decided to include them anyway because they had put so much into it.

So how did we compare the offerings from such very different teams with their various levels of experience? We scored the teams on four points, derived from the Auto Trader challenge:

We awarded the prize to a team from Altrincham Grammar School for Boys (@agsb_official) because they produced a good game, we liked the way they worked, they learnt a lot and they were the only ones to consider all the parts of the challenge.

What we took away

We enjoyed the whole experience, particularly seeing how enthusiastic the teams were and how much fun they had.

Hafeez speaks for all of us:

Inspiring future tech talent is something that is close to my heart. The shift in our reliance on technology as a whole is scary and I feel we have a lack of talent coming through, so I always try to participate in opportunities like this. Mentoring in these events helps me to learn as I strongly believe you can learn from everyone no matter how old or experienced they are. This will aid my continuous development by keeping me motivated, giving me recognition and a sense of purpose and this will serve as a medium for me improve my ideas and creativity.